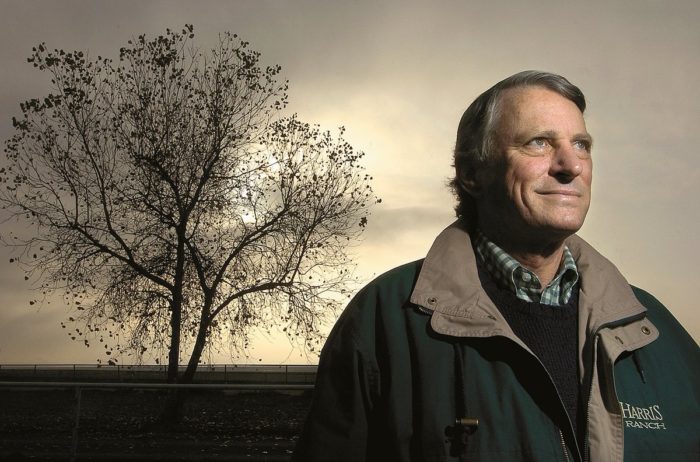 COALINGA, Calif. (Dec. 5, 2018)-Combining over 100 years of leadership and excellence in California and national racing, John Harris’s Harris Farms and the Johnston’s family’s Old English Rancho are joining forces to keep California racing and breeding strong. Stallions now all be located at the Harris Farms facility near I-5 about midway between the Bay Area and the Los Angeles area include: Acclamation, Clubhouse Ride, Desert Code, Jeranimo, Lakerville, Majestic Harbor, Mr. Big, Prospect Park, Smiling Tiger, Tamarando, and Vronsky. Both farms utilize over 700 irrigated acres or irrigated pasture for boarding of broodmares as well as stallions, and the development of yearlings.

Jonny Hilvers, the general manager of Old English Rancho for 8 years will become General Manager of the newly combined entity. Hilvers, 33, a Sanger native is the grandson of popular California owner and breeder, Buddy Johnston and great-grandson of Elwood “The Pie Man” Johnston, the founder of Old English Rancho, a dominant force in California racing and breeding for decades.

Harris Farms owner John Harris, a 1965 graduate of the University of California at Davis is a farmer, a cattleman, a beef processor, a restaurateur, and an enthusiastic owner and breeder of thoroughbreds in California for over 50 years. He has been a member of The Jockey Club since 1984, still serves on the California Thoroughbred Breeders Association Board and is a former Chairman. He was inducted into the Thoroughbred Hall of Fame in 2008. He is also a prominent owner and breeder, having bred numerous California Champions and Grade One Stakes winners Alphabet Kisses and Cost of Freedom. Although breeding predominantly to race, he has sold several sales toppers in recent California yearling and 2-year-old sales. Harris was Chairman of Bay Meadows Racing Association in the mid-1990s.

Dave McGlothlin, who started managing Harris breeding stock in 1981, will remain as a consultant.

Per Antonsen, farm trainer for many years will continue in that role. At Harris, he was key in the early training of Champions Tiznow and California Chrome, and many other California champions.

Raul Rosas, a 30 plus year horseman who has handled all the top Harris stallions remains at Harris as stallion manager.

Dr. Jeanne Bowers Lepore, a graduate of the Veterinary School of the University of California at Davis has been a well-respected veterinarian for many years, and has overseen Harris Farms equine health since 1997. She is assisted by her associate Dr. Virginia Hernandez, as well as newly arrived Kristen Phillips and Ana Celdran.

Debbie Sue Winick will remain as Office Manager and Customer Relations specialist. Debbie is a former Paymaster of Purses at Bay Meadows and was an Executive Assistant at California Thoroughbred Breeders Association. Laurie Brown, a key player for Harris for the last several years, manages the River Ranch operation near Sanger, assisted by Lindsay Miller. Patricia Langden is foaling manager and assists with sales preps, as well as overall equine health issues.

John Harris commented, “I feel incredibly blessed to have such a fine group of people come together with the common goal of producing thoroughbreds that can compete at the very top levels. Now that the drought is behind us, and by adding additional pastures, we can give horses more room and expansive grass pastures to grow up on, while still having many smaller sized paddocks as options for various needs. I want to have the best facility, the best nutritional and health programs, the best people, and the most promising stallion roster in California. We want to be valued as a place to raise top horses. Jonny Hilvers will be a key ingredient to all of the mutual success I envision. He brings us solid leadership and practical excellence, and represents a new generation to help lead California forward”.